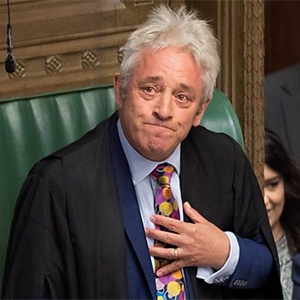 British politician and Speaker of the House of Commons, John Bercow

British politician and Speaker of the House of Commons, John Bercow announces his decision to step down.

Mr. Bercow will step down at the next election or on October 31st, whichever comes first.

Speaking in parliament earlier, Mr. Bercow said his 10-year “tenure” was nearing its end and it had been the “greatest honour and privilege” to serve.

He has faced fierce criticism from Brexiteers who have questioned his impartiality on the issue of Europe.

But a tearful Mr. Bercow today made no apologies.

His announcement will kick off a battle to replace him, with candidates expected to include former Labour Ministers Chris Bryant, Harriet Harman, Meg Hillier and rosie Winterton.

Other candidates include the Deputy Speakers, Sir Lindsay Hoyle and Eleanor Laing, while some Brexiters want the conservative Sir Henry Bellingham to put himself forward.