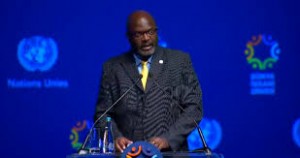 Barbados’s Attorney General Adriel Brathwaite has suggested that Barbadians can take comfort in the fact that the island’s crime situation is no where near as bad as that of neighbouring Trinidad and Tobago, which has recorded over 80 murders in just two months.

AG Brathwaite made the statement while speking to constituents at a branch meeting in Belair, St. Philip.

As he made reference to a video, allegedly of an incident in the twin island republic, which has been making the rounds on social media, Mr. Brathwaite said, in Barbados there is an acceptance and or recognition in Barbados that crimes are solved.

In the video, the brazen attack occurs in broad daylight and the victim is shot multiple times by two men.

Mr. Brathwaite added that this would not happen in Barbados, because crimes are solved and perpetrators are locked up for breaking the law.

Mr. Brathwaite noted that one can see this kind of behaviour only where people believe they can act with impunity break the law and take life with no consequences.

The Barbados AG insisted that in his country 90 to 95 per cent of crimes are solved in particular homicides.

He denied speculation of a runaway crime stating there was a misperception of the situation in the country.

Last year, a total of 30 murders were reported on the island.