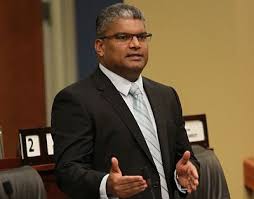 Former Attorney General Anand Ramlogan is at the police headquarters in Port of Spain where he is being detained.

Mr. Ramlogan was held at his Palmiste Park home during the early hours of this morning connection with attempting to pervert the course of justice during his time as Attorney General.

Newscenter 5 understands a team of officers led by Deputy Commissioner of police Harold Phillip went to Mr. Ramlogan’s Palmiste Park home at around 6 O’clock and executed a search warrant.

The officers informed Mr. Ramlogan that he was a suspect in the investigation into an attempt to pervert the course of justice when he was attorney general under the Peoples Partnership administration

Mr. Ramlogan was taken to the police headquarters on Sackville Street, Port of Spain where he remains.

We are told three weeks ago, police attempted to execute a search warrant at Mr. Ramlogan’s home, but he was out of the country at that time.