A threat of legal action against MP Dr. Roodal Moonilal 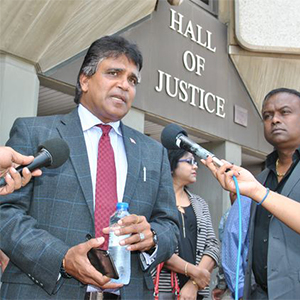 A threat of legal action against opposition MP, Dr Roodal Moonilal over statements made about the Prime Minister’s official residence in Tobago.

The threat is coming from the Urban Development Corporation of Trinidad and Tobago.

On a political platform on Monday night Dr. Moonilal called for a full in­de­pen­dent in­quiry into the re­fur­bish­ment works at Dr. Keith Rowley’s

At a media conference Mr. Garcia also dispelled claims of a highway being built to the PM’s residence.

Mr. Garcia further noted that UDECOTT is weighing its legal options on the matter.