31 wins in 31 years – Diamond Vale makes history in the West, while Success RC continues winning streak in the East

POS, Trinidad, Monday March 12, 2018
– Diamond Vale Government Primary School continued its tradition of excellence, emerging West B Zone champions at the Kelvin Nancoo Primary School Games on Tuesday March 6th at the Hasely Crawford Stadium in Port-of-Spain. The school now boasts of 31 wins in the 31 years of the competition which has been proudly sponsored by NESTLÉ Trinidad and Tobago through its MILO® brand, for as many years. The following Thursday, when East Zone schools battled on the track at the same venue, Success RC continued their dominance in the Boys Category of the East B Zone and took home the championship with a massive crowd – the largest in the history of the East Zone – as its witness. 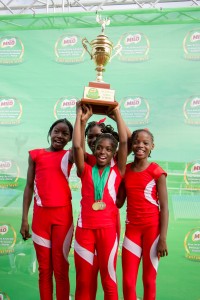 In 2018, NESTLÉ took the decision to sponsor both track and field meets to drive its global commitment to help 50 million children live healthier lifestyles by 2030. The two meets are together now known as The Kelvin Nancoo Primary School Games – Powered by NESTLÉ MILO®.

Since its inception, Diamond Vale has never lost the track and field meet, previously known as the MILO® Games. As a result, from Principal Yvonee Pinder to current Principal David Weekes, the school has been dubbed the ‘The Jewel of Diego Martin.’

Outstanding performances from Tyrell Springer, Darielle Prescott, Jeneice Burton and Abigail Burton helped the school dominate the track, claiming gold in three events, to continue its custom as champions of the Port of Spain and Environs West B Zone Schools.

Prescott emerged the Victrix Ludorum in the Under-15 division while the Burtons – Abigail and Jeneice – won the honour among the Under 13’s and Under 11’s, respectively. Springer was the Under 13 Victor Ludorum alongside Timothy Simpson of Patna River Estate Government in the Under 15 category for West B. 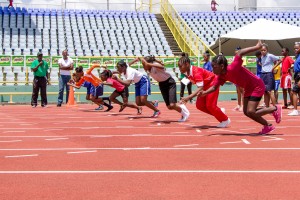 In a colourful parade, the schools ‘march past’ Minister of Sport, the Hon. Darryl Smith to the sounds of the Trinidad and Tobago Police Band. Maraval RC captured the win with 169 points. Nine points separated Dunross from victory as they emerged runner-up with 160 while Carenage Girls took third with 153 in the West A Zone.

In West B, Diamond Vale was beaten into second in the March Past when Patna River Estate stole the show at the Stadium. 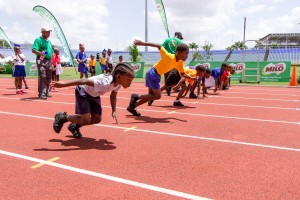 Principal Dianne Neptune and Vice Principal Karlene Ford of Success RC School were immensely proud of the performance of their School’s boys as they emerged the East B Zonal champs for the second year running. However, in the race for the champion Girls School in East B, Success RC played second fiddle to Eastern Girls Government, snatching the title from the returning winners with a 5-point difference.

On the track, phenomenal performances were seen from Under 9 champions Nehemiah Hinds of St Dominic’s RC and Andreen Sylvester of Lower Morvant Government from the East A Zone. Also from East A, Shaquille Richardson of Morvant New Government and Junior Alleyne of St Dominic’s RC, were standouts.

In the East B Zone, the three most outstanding performances came from students Kerlis Navarro, Tia Lewis and Jabari St John, all of Success RC. 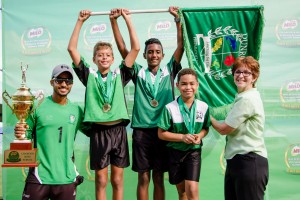 The day began in style with all schools participating in a competitive March Past where perennial Champions Morvant Anglican School returned to victory once more, with St Dominic’s RC coming in second in East A.

In the East B Zone, Bethlehem Girl’s RC pulled off an upset to take the title from St Phillips Government. Along with the large, vibrant crowd gathered at the Stadium, the colourful battle was witnessed by NESTLÉ’s Robin Cumberbatch, School Supervisor 1, Carl Thomas, Honourees, Jacqueline Jones Simon and Lawrence Charles, along with the patron of the Games Kelvin Nancoo, who addressed the gathering for the first time in 31 years. 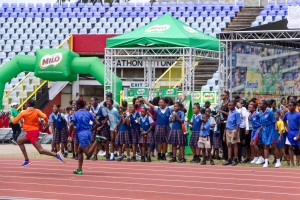