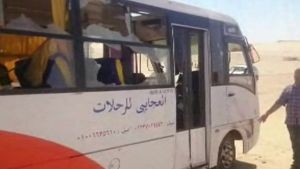 Gunmen have attacked a bus carrying Coptic Christians in central Egypt, killing at least 28 people and wounding 25 others.

The bus was travelling to the Monastery of St Samuel the Confessor, 135km (85 miles) south of Cairo, from Minya province when it came under fire.

No group immediately said it was behind the attack.

But Islamic State (IS) militants have targeted Copts several times in recent months, and vowed to do so again.

Two suicide bombings at Palm Sunday services at churches in the northern cities of Alexandria and Tanta on 9 April left 46 people dead.

Another suicide bombing at a church in the capital in December killed 29 people, while a Christian community was forced to flee the town of el-Arish in the northern Sinai peninsula after a series of gun attacks in February.