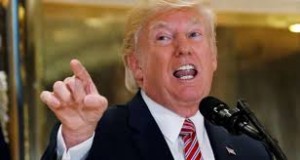 U.S President Donald Trump has launched an attack on Amazon saying it pays little or no local or state taxes.

He also accuses it of “putting many thousands of retailers out of business”.

Mr. Trump added in a tweet that “They …use the U.S postal system as their delivery boy causing tremendous loss to the U.S.

It follows a report on the news website Axios on Wednesday that claimed Mr. Trump wanted to “go after” Amazon.

It claimed his real estate buddies tell him that Amazon is killing shopping malls and brick-and-mortar retailers and he agrees.