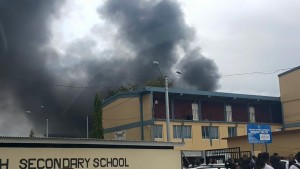 One of the students detained by police in connection with the fire at their Chaguanas South secondary school has been charged.

The 13 year old boy is a form two student at the school and is to be taken to court this afternoon.

The boy is to be represented by what is called a duty counsel provided by the state for all juveniles. The other boys questioned have been released as they were said to be witnesses to the incident.

The blaze yesterday destroyed an annex at the school which housed three classrooms. Police and fire officers believe the blaze was deliberately set.

The incident has shocked many, including the National Parent Teachers Association president Zena Ramathali. She and her association are calling for a full investigation into the incident.

Mrs. Ramathali said this morning the school has had its fair share of problems and there have been complaints about the behaviour of students there.

Meanwhile the vice president of the Trinidad & Tobago Unified Teachers Association is not aware of the complaints referred to by Mrs. Ramathali. However, Lynsley Doodhai said what may have happened is a reflection of the reality of the society.

The fire occurred while students, teachers and police officers were gathered inside the auditorium for the launch of an anti bullying programme.