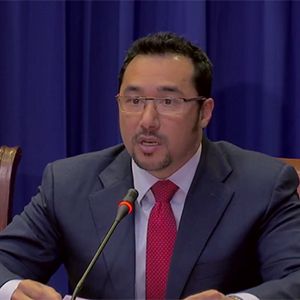 He was on duty yesterday at the Anand Low Price super market in Debe when he was gunned down during a robbery.

At the passing out parade of police officers this afternoon, Minister Young warned the new squad of the dangerous task of crime fighting ahead of them.

However, he assured the TTPS has the full support of the government as it grapples with the crime situation facing the country.

Minister Young also sought to silence critics of Commissioner of Police Gary Griffith who he said was pushing back at the criminal elements. He said his government would not bury its head when it comes to the issue of crime.

Squads A to D of batch 1 of the Trinidad And Tobago Police Service graduated this afternoon at the Police Barracks, St James.