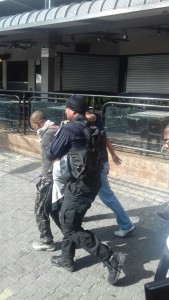 One man is now in police custody following an attempted robbery at 51 Degrees Nightclub and Town Restaurant. Police say the 28 year-old man is one of four suspects.

Officers say he was held while the other three managed to escape. After nearly five hours of standoff, officers were forced to use tear gas to draw the man out of a ventilation doc in the ceiling of the 51 Degrees Nightclub.

The man was apprehended just moment ago by police. Acting Senior Sup. Mc Donald Jacob from Port of Spain division was at the scene.