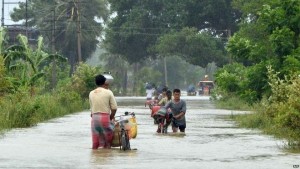 Heavy monsoon rains in India have killed more than 100 people in the past week and forced tens of thousands of people to take shelter in relief camps.

A cyclone struck the state of West Bengal, killing 48 people in flood-related incidents. More than 200,000 people have moved to relief camps.

In Burma, floods have left at least 47 dead. Wind and rain from Cyclone Komen added to damage in India in recent days.

Nearly four million people in 10,000 villages have been affected by the floods in the worst-affected Indian state of West Bengal