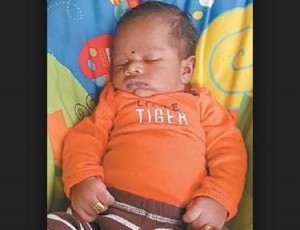 The death of Baby Kristiano Aziz has been labeled an accident. The two month old baby was found motionless in his crib at a daycare centre in Barrackpore on Monday.

An autopsy performed at the Forensic Science Centre in St James on today, found that death was caused by positional asphyxia which occurs when the body position blocks the airway.

According to the autopsy Kristiano suffocated.

The baby was found motionless in a crib at a daycare centre by his mother, Lisa Ramjattan, when she went to pick him up.

Police have interviewed the owner of the facility, but no charges would be laid.

The daycare owner said Kristiano was fed a bottle at around 1.30pm and placed in the crib. Two hours later he was dead. His mother said when she arrived to pick up her son she thought he was asleep and took pictures of him. But as she lifted him, the child was unresponsive.

He was taken to the Princes Town Health Facility where baby Kristiano was pronounced dead on arrival.