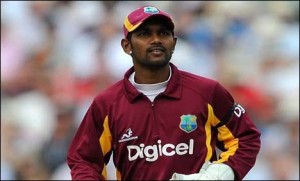 West Indies’ test captain Denesh Ramdin is claiming that he is being victimized following his axing as skipper of the Trinidad & Tobago squad for the forthcoming domestic four-day Franchise Cricket tournament in the Caribbean.

Ramdin said he had met the Trinidad and Tobago Cricket Board’s executive on November 3, to discuss the forthcoming season and admitted the move had come as a shock as he had anticipated continuing his tenure as captain.

Ramdin alleged he was being victimised and said that he had been asked about the abandoned India tour during the meeting with the TTCB.

All-rounder Rayad Emrit has been named captain of the Trinidad and Tobago side, however vice-president of the Trinidad & Tobago cricket board Patrick Rampersad has denied Ramdin’s allegation.

This entry was posted in News, Sports News. Bookmark the permalink.