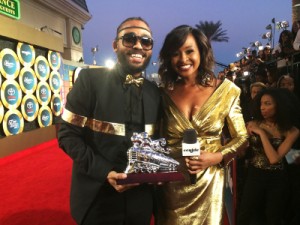 After three nominations, Machel Montano can finally add a Soul Train Music Award to his collection. The soca star on Friday night received the award for Best International Performance at the star studded event in Las Vegas.
Montano’s won with his 2014 Road March hit “Ministry of Road”. Montano expressed his gratitude in an Instagram post saying it was a triumphant moment for soca music, the country and the Caribbean.

In addition to receiving the award, Montano was also a presenter. Montano’s award comes just weeks before his 40th birthday.

He has also received three first round nominations for the Grammy Awards and is also nominated in four categories for the Live Music Awards in the Caribbean.

The Soul Train Music Awards will be aired on November 30 on BET.