Gov’t/opposition blame each other for Greenvale floods 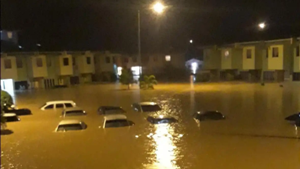 Planning And Development Minister Camille Robinson Regis says town and country recommendations for Greenvale were implemented but the rainfall of two weeks ago, was overwhelming.  Residents at Greenvale were flooded out during three days of rains. Many are now questioning why houses were built in that area and who gave approval for the project.

The two main political parties have been explaining their respective roles in realising the project.

On the Afternoon Drive On I95.5 FM yesterday Minister Robinson-Regis said although the project was largely completed in 2010, approvals were only given in 2014.   Minister Robinson Regis also noted that some infrastructure was implemented but the recent rains proved to be too much

Dr Moonilal said minutes of the Housing Development Corporation’s board meeting of March 2005 showed then HDC chairman Andre Monteil, approved the construction of 230 units and awarded the 97 million dollar contract to Trinity Housing Limited owned by the Rahael Group Of Companies.