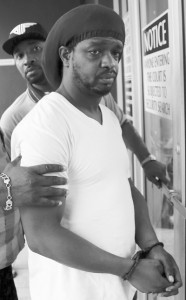 A magistrate has said yes to Ricardo Jerome spending the Christmas holidays with his son and the woman he is alleged to have beaten in an Arima bar. The beating was recorded via a cellphone and it sparked outrage when it went viral.

36 year-old Mr. Jerome was charged in November and is currently on $60,000 bail. Yesterday his lawyer Fareed Ali asked magistrate Debbie-Ann Bassaw to allow Mr. Jerome holiday time with the woman and their child.

Mr. Ali admitted to the court that part of his client’s bail agreement is that he is to have no physical or verbal contact, and if this is violated, he can be immediately rearrested. But Mr. Ali also reminded the court that the couple has a child together and it was Christmas.

Magistrate Bassaw stood down the matter and asked the police to contact Ms. Marchan to ask if this was really what she wanted. Ms. Marchan is said to have confirmed wanting to spend the holidays with Mr. Jerome. Leave was then granted for the accused to spend Christmas Eve, Christmas Day and New Year’s Eve and New Year’s Day together.