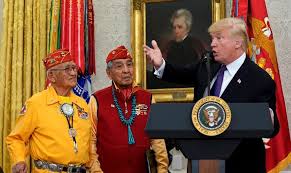 He was at the time welcoming Native Americans to the White House yesterday, when he targeted Congresswoman Elizabeth Warren, one of his political foes.

In response the Congresswoman said yesterday it is a shame that the President would use such an occasion to attack her.

She said she won’t be silenced by the President’s words and actions.