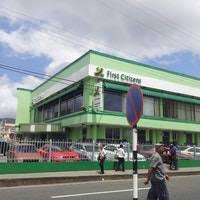 An attempted robbery at the Arima branch of the First Citizens Bank.

The bank has confirmed there was an attempt which occurred sometime over the last weekend.

The bank says investigations are being conducted by the police, its security officers and the management.

It says no cash was stolen.

It is reported that the bandits cut a hole in the roof of the bank.

It is believed they were targetting automated teller machines.

The situation forced the closure of the bank for all of yesterday.

First Citizens Bank says operations at the branch will resume this morning.

The bank also says it has noted with concern an apparent increase in incidents of robbery affecting not just banks, but other businesses and private citizens in the context of economic contraction.

The release from the bank reminds its customers and members of the general public to remain vigilant and pay close attention to their personal safety.