The wreckers are back! 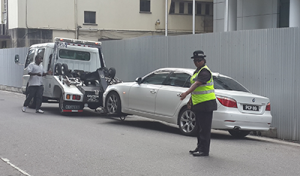 The policy was re-implemented by Port of Spain City Corporation and its new mayor, Kerron Valentine.

Speaking with Newscenter 5 yesterday, Mr. Valentine said the move had become necessary as residents and business owners were being robbed of their right to use their own driveways

Newcenter 5 took to the streets to get the views of some on the mayor’s decision.