Carolyn Seepersad Bachan is the new political leader of the C.O.P 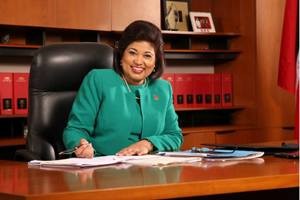 Carolyn Seepersad Bachan is the new political leader of the minority opposition, Congress of the People. She beat her rival Dr Sharon Gopaul McNichols by a landslide, in the party’s election on Sunday.

The former minister and former chairman on the C.O.P, captured ten of the thirtheen polling stations.

Shortly after she was declared winner, Mrs Seepersad Bachan admitted there was a low voter turnout.

Speaking with reporters, Mrs Seepersad Bachan also said the C.O.P would be contesting the next general elections alone.

Over 40 thousand C.O.P members were eligible to vote.