Typhoon Koppu kills 2 in the Phillipines 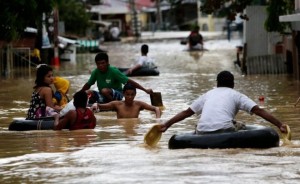 Heavy rain and floods are affecting dozens of villages, after Typhoon Koppu swept through the northern Philippines.

The slow-moving weather system has killed at least two people and forced tens of thousands from their homes.

Troops have been deployed to help residents trapped on rooftops, but are struggling to access more remote areas.

Koppu has now been downgraded to a severe tropical storm by the Japanese Meteorological Agency, which is responsible for naming and tracking it.

However, the Philippines’ own weather agency, which calls the weather system Lando, is still characterising it as a typhoon.