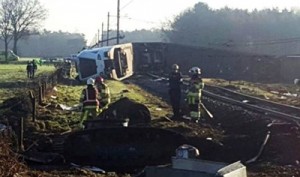 A passenger train derails near the Dutch town of Dalfsen, leaving one person dead. Reports say the train hit a crane on a crossing, tilted over and went into a field, leaving several carriages lying on their sides.

Residents say the crane had been crossing the line, in an easterly direction, when the train ran into it. The local mayor said one person was dead but it not yet known how many others are hurt.

Witnesses told police the train driver had been killed but there was no immediate confirmation from the operator. Mayor Han Noten told Dutch media that some 15 people had been on board at the time of the crash, at around 08:45 am