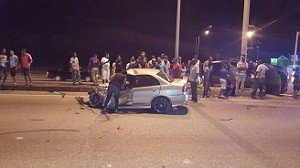 The six people killed in the accident in Arima have been identified.

The tragedy occurred on the Churchill Roosevelt highway at the O’Meara intersection at around 11:10 last night.

They were rushed to the Arima health facility and later transferred to the Eric Williams Medical Sciences Complex, where they remain warded in a critical condition.

Eyewitnesses told police one of the vehicles broke the traffic lights.