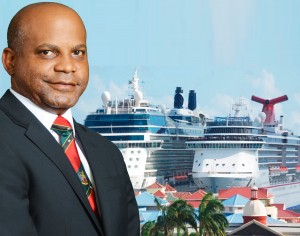 The government of St. Kitts-Nevis is going ahead with plans to build a second cruise pier in, but is adamant that it will not seek the assistance of a cruise line to do so.

Minister of Tourism Lindsay Grant made the administration’s position clear during government’s weekly radio show “Working for You”. “We are not going the route . . . of having a cruise line build a pier for us. We are learning from the mistake of others,” he said.

Plans to build the second pier are in advanced stages, the minister said, but government is awaiting a final proposal before going to tender.

Plans were in the works by the previous administration to have a second pier built at Port Zante to accommodate more cruise ships to St. Kitts. The company that was pursued for this project was Jay Cashman Inc., a firm out of Boston, but the new administration had indicated when it took office, that the government would pursue a different arrangement to build this new pier.

The tourism minister highlighted the importance of getting this new pier completed as commitments have already been given to cruise lines and they have begun positioning ships to serve this new pier for the 2017 season. He expects construction on the new pier to begin in January of 2016.